The Building of Noah's Ark

And God said to Noah, “Make yourself an ark of gopher wood - the length of the ark 300 cubits, its breadth 50 cubits, and its height 30 cubits. Make it with lower, second, and third decks. For behold, I will bring a flood of waters upon the earth... Noah did this; he did all that God commanded him.”- Excerpts from Genesis 6, ESV

The Ark is one of the most iconic religious symbols in the world. Flood legends exist everywhere people do, with more than 200 cultures around the world preserving some kind of flood or ark story. So when the founders of The Ark Encounter were considering their next big project, the Ark was at the top of the list. 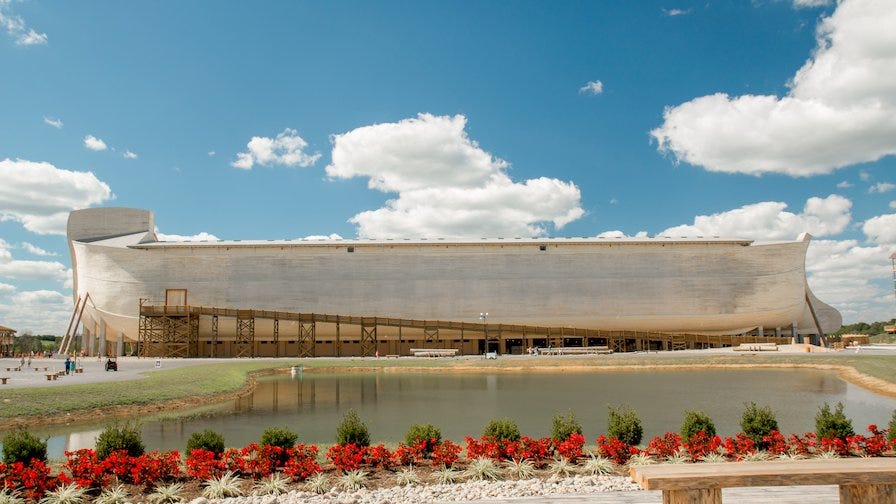 The inspiration for the project began with the founder’s desire to create a family-friendly attraction that would encourage people to reconsider the Bible’s relevance in our day and age. The now completed reconstruction of Noah’s Ark in Williamstown, Kentucky took just over one year and a half to build and is considered the largest freestanding timber frame structure in the world with a total of 7,300 m3 of timber used in its construction. A football field and a half long, the volume of the Ark is the equivalent of 500 standard semi-truck trailers and features three levels of exhibits with a 600-seat restaurant being prepped for the top deck. The Ark’s maximum capacity is 10,000 people, however organizers plan to limit it to 3,000 inside at any one time.

The vision originated with Ken Ham, president of Answers in Genesis, and Patrick Marsh - a world-renowned art director whose designs include the Jaws and King Kong attractions at Universal Studios in Florida, among other high profile projects around the world. The Ark project began on paper with the combination of Patrick Marsh’s vision and the building and architectural expertise from the Indiana-based Troyer Group that had built the American Countryside Farmers Market in Elkhart, Indiana- the largest wood-pegged barn in the USA. LeRoy Troyer of the Troyer Group spearheaded the architectural plan for The Ark Encounter and recruited Amish builders from previous projects to head up the heavy timber framing and carpentry work for the Ark. 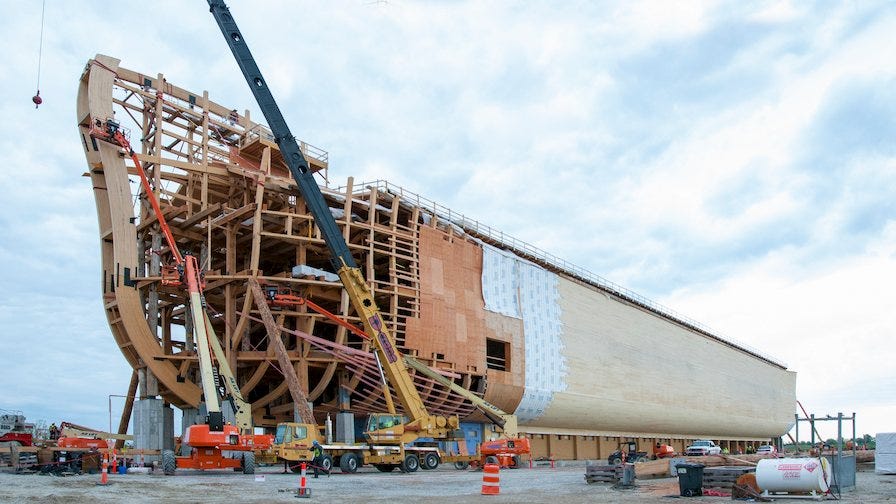 The very first design question was a simple one – how long is a cubit? Based on the distance from the elbow to the tip of the longest finger, various cubit lengths existed in the past. For the Ark project, the Hebrew cubit length of 51,8 cm was used – making the overall size of the Ark itself 155.5 m long, 15.2 m tall, and 25.9 m wide.

One of the biggest challenges facing the project was the question of who was going to be able to supply all the wood in the quantities and sizes required. Enter Colorado Timberframe, a company just outside of Denver that claims to have “the largest and most technologically advanced timber frame manufacturing facility in North America.” Their massive factory bursts with the latest technologies in timber frame equipment that includes an extended Wood-Mizer LT15 sawmill. 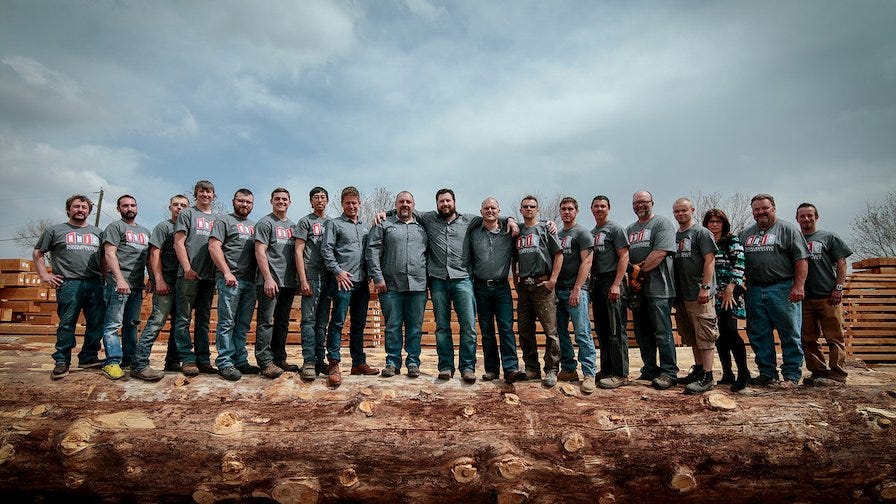 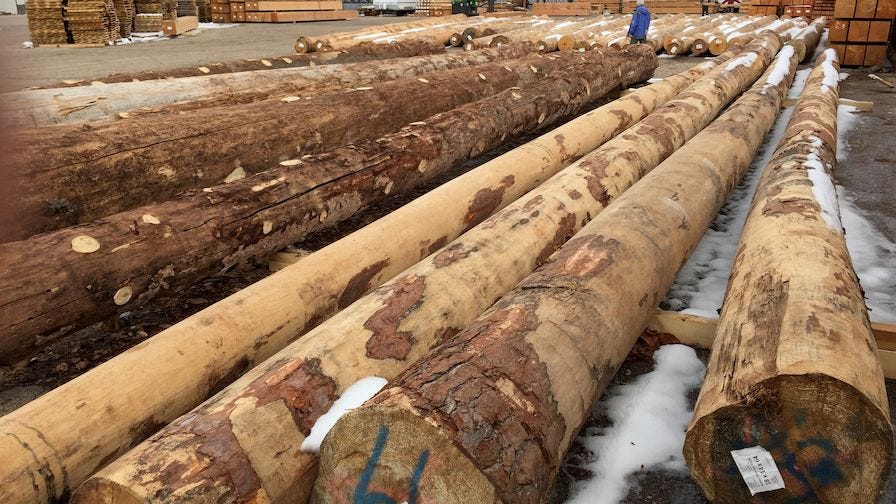 Keenan Tompkins, owner of Colorado Timberframe, received a text message from one of his employees that said, “If we have the largest timber frame manufacturing facility in North America, why aren’t we cutting the largest timber frame?” Keenan did some research and contacted The Troyer Group. The timing could not have been more perfect with the Ark design nearing completion and the Troyer Group actively looking for a company to provide the required timber. “They were still trying to figure out if one company could actually handle the volume of the project,” said Keenan. “We told them we had the capability of doing the entire project. We’re the only company that can do the sizes of the timbers that they had, and actually fabricate all the timbers.”

Colorado Timberframe was awarded the contract and immediately got to work. With 3,500 m3 of heavy timbers required for the construction of the timber frame itself, each individual timber element needed to be sized precisely. Highly accurate joints and holes needed to be cut into each timber so the whole frame could be assembled on schedule. “We had to add staff, because we ended up running three shifts and working 24 hours a day, 6 days a week for about a year,” Keenan recalls. “The crew consisted of 25 guys in the shop for about a year – hand cutters, machine operators, and yard guys. That doesn’t count our install crew. We had another 10 guys that worked alongside the Amish at the Ark site.” 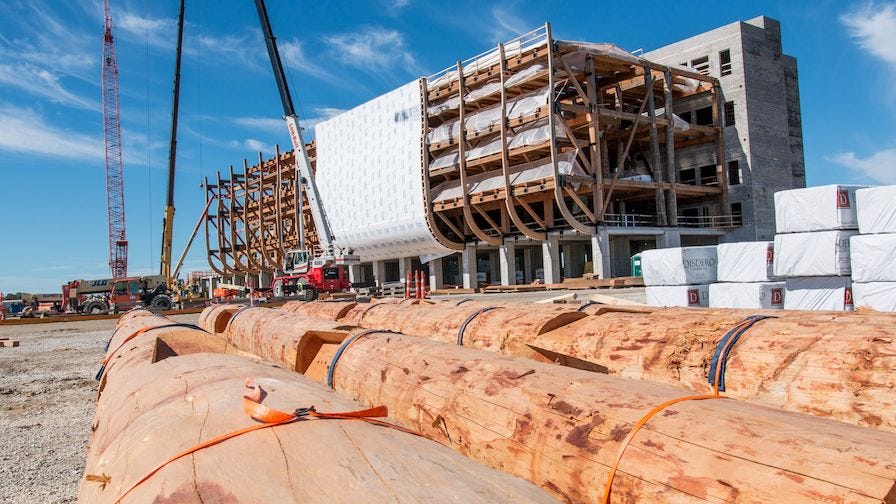 All of the square-cut timbers used inside the Ark are douglas fir harvested and milled in Oregon, Washington, and British Columbia, Canada. “All in all, there were 120 semi-trailer loads of timber,” said Keenan. “We brought in all this rough-sawn, squared timber and the engineering plans had very specific size requirements for the final timber sizes. Half of the timber had to be resized before it was milled on the CNC machine. So that’s where we really worked the Wood-Mizer for a year. About half of the Ark timber frame passed through the LT15.” 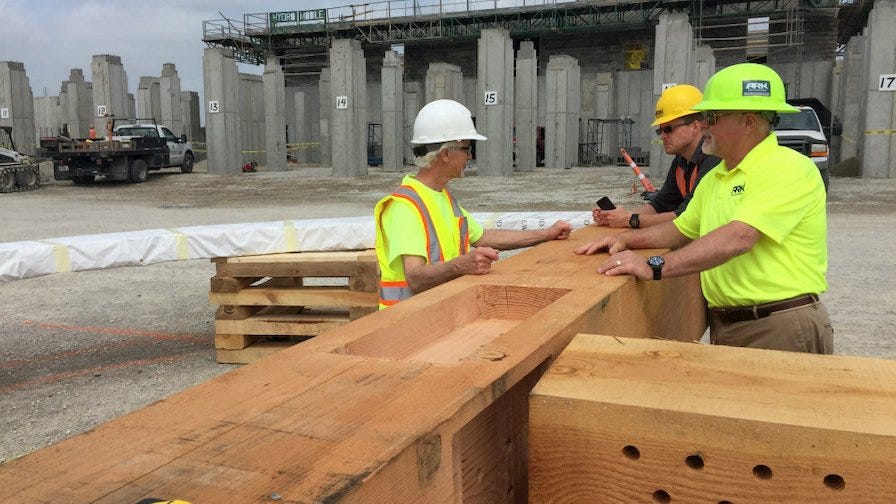 The LT15 sawmill is part of Wood-Mizer’s entry level range of sawmills, often purchased by woodworking hobbyists or first time sawyers. However, due to the ability to saw any length of timber with unlimited bed extensions, the LT15 is also used by companies like Colorado Timberframe for strictly commercial purposes. “The LT15 sawmill was an essential part of the process,” said Keenan. “It was both the resizing of the timbers for the Ark, and since the timbers for this project were so huge, we had to custom make our own pallets. So all the pallets were made on the LT15 by ripping down all the offcuts and waste material. You can imagine how many pallets were needed for 3,500 m3 of timber!”

Standard Wood-Mizer 4/32 and 10/30 DoubleHard sawmill blades were used throughout the project, however, the blades were customized to achieve the rustic surface finish the Ark planners were looking for on the beams. “They wanted the wood to have a rustic character to look like rough-sawn timbers,” shared Keenan. “We had to modify the blade to get the same rough sawn finish that you would get from a mill.”

Once the beams were the correct size, the machining process would begin – notches, holes and more would be bored into each beam with maximum precision, thanks to Colorado Timberframe’s new CNC machine. “The timber would go through the K2I Hundegger CNC machine. We have a four foot wide track, so it can do beams 120 cm wide to up to 50 cm tall, and 18.3 m long. We got that machine for large commercial projects. It does all the traditional timber frame connections - mortise and tenon joints, as well as drillings and slot cuts, and any kind of recesses or notches that the timbers need to accommodate either wood connections or steel plates.” 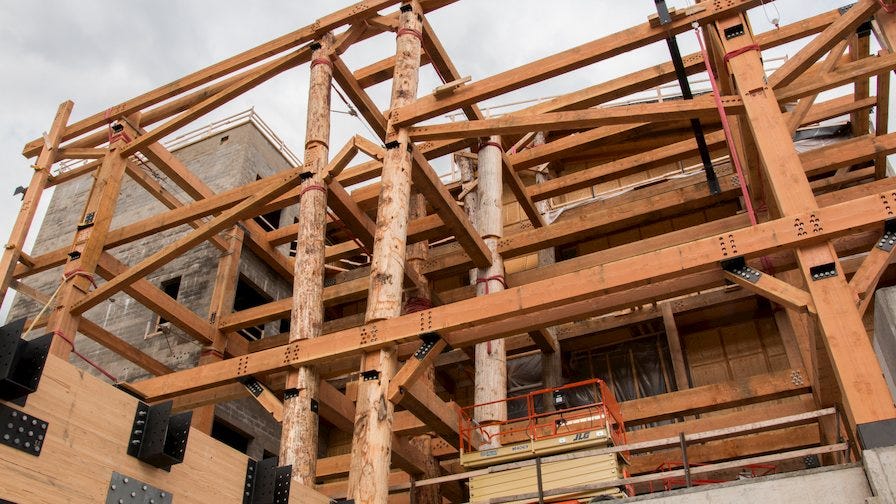 But not all the timber needed to be squared-up. The Ark design plan called for 66 massive lodge pole logs running from the bottom floor to the top of the Ark – 16.8 m long. A significant number of the logs used for the columns were standing dead engelmann spruce from Utah. “We made a deliberate and concentrated effort to incorporate as many reclaimed logs as possible,” shared Keenan. “The spruce logs were standing dead, and responsibly harvested.” Colorado Timberframe built a special jig in order to rotate the massive lodge pole logs and cut all the needed joinery, which was done by hand and took their team of six men two full days to complete one log.

Miraculously, Colorado Timberframe delivered the timber requirements on schedule, working on the project for just over a year, in addition to continuing to build custom timber frame homes and structures for other clients. ”They did some pretty incredible things with wood before the invention of steel and concrete,” Keenan reflects. “So it’s kind of going back to incorporating and using that, but applying it in a modern context.”

Keenan shared that even though The Ark Encounter was a huge project, the key to being successful was project management, organization and scheduling to ensure the company didn’t get overwhelmed with the magnitude of the project. “Henning Mund, our German master timber framer and my partner –we could not have done it without him,” said Keenan. “I personally believe that he’s the best timber framer in the USA.”

About 2,000 km east of Colorado Timberframe’s facility, excavation at the Ark site began in August 2014 in Kentucky with 380,000 m3 of dirt removed to clear the area for the Ark. Foundation work began in February 2015 and the “Ark raising” began in June 2015. 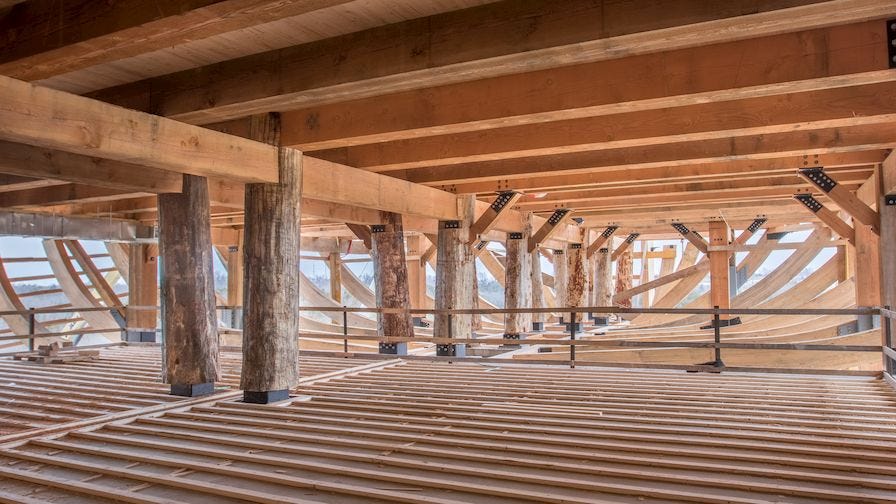 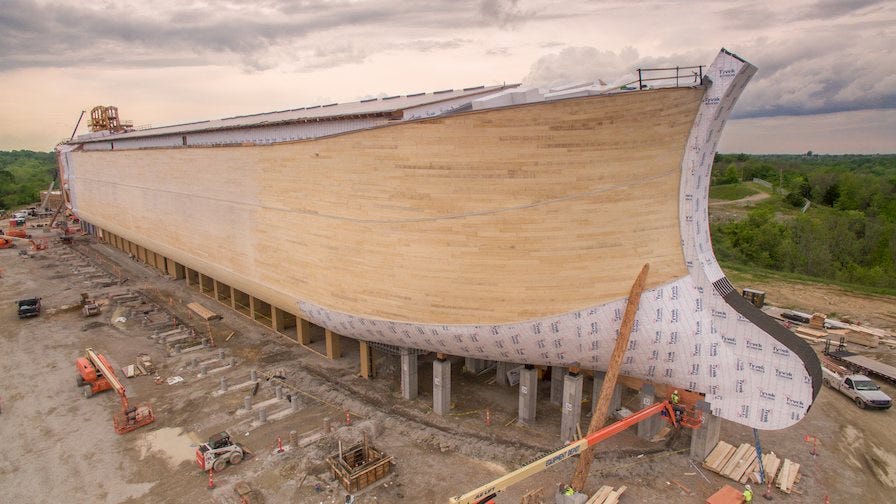 The Ark plan called for the timber structure to be set 3,6 m off the ground on 102 concrete pillars. As the timber arrived in Kentucky, construction began on the massive timber frame structure itself. Like any other timber frame structure, the Ark frame was divided up into a series of 2D sections called “bents”. As each “slice” or bent is assembled and put into place, then the 3D structure begins to grow. Bent assembly was done on the ground using raised wooden platforms to keep all the various timber elements aligned as they were joined like a giant puzzle. 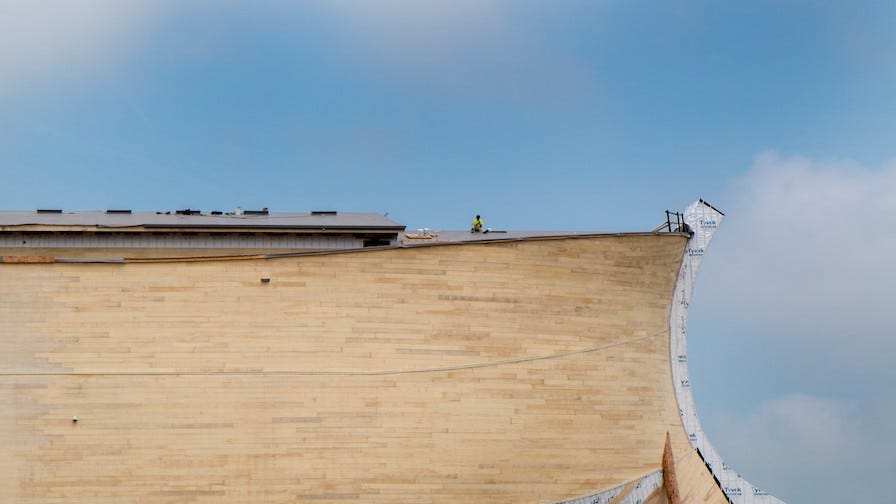 The first bent weighed 12,5 tons and took two weeks to assemble and put into place. Two smaller cranes lifted it upright and then a large crane lifted the bent into place on the concrete pillars. As the Amish construction crew got faster with each bent, by the end of the project, bents were being assembled and installed at the rate of two per week. As the project neared completion, Orie Lehman, one of the Amish carpenters that oversaw the timber framing set up his Wood-Mizer LT40 portable sawmill at the Ark site in order to cut all the timber needed for the hundreds of benches placed inside and outside the Ark.

The Ark Encounter is now open to the general public and reports that more than 300,000 people have visited within the first two months.

The Ark Encounter has been referred to as the 8th wonder of the world and required hundreds of people directly working together towards a common goal – crafting the largest freestanding timber frame structure in the world. With the necessary skillset, equipment, and dedication from companies such as Colorado Timberframe and the Troyer Group, the breath-taking Ark Encounter project can now be enjoyed by visitors coming from around the world.

Wood-Mizer Sawmills at the Ark

In addition to the LT15 sawmill from Colorado Timberframe, at least two other Wood-Mizer sawmills were involved in the Ark project. An LT70 sawmill was used to cut the first beams used in the inaugural “Peg and Beam” ceremony for the project commencement. An LT40 portable sawmill was also used on-site during the final months of the project to produce bench material and additional finishing items that could be processed from leftover timber. 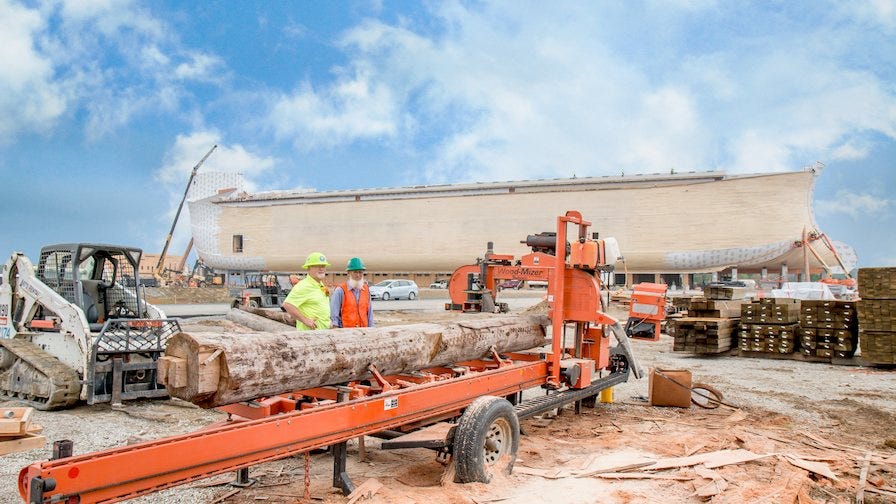