“When I took over this site a lot of people thought I knew what I was doing,” says Brian Wylie, the owner of Carronbridge Sawmill at Thornhill in Dumfries & Galloway. “But in all honesty I knew nothing about sawmilling! I bluffed my way through and learnt from my mistakes.” Unconventional it may be, but it’s an approach which has worked for Brian.

With the help of his wife, Veronica, and general manager Bill Frew, 23 years after taking over the sawmill he now processes 36,000 tonnes of timber a year employing 27 full-time staff.

Specialising in the manufacture and distribution of fence posts, panels, pallets, battens and trellis throughout the UK, the team has developed a reputation for quality first and foremost, but also flexibility which Brian says sets them apart from other large mills.

The latest addition to the team – a Wood-Mizer WB2000 wide band mill – is helping the company shelter itself from the volatility of the timber market while upping production at the same time. 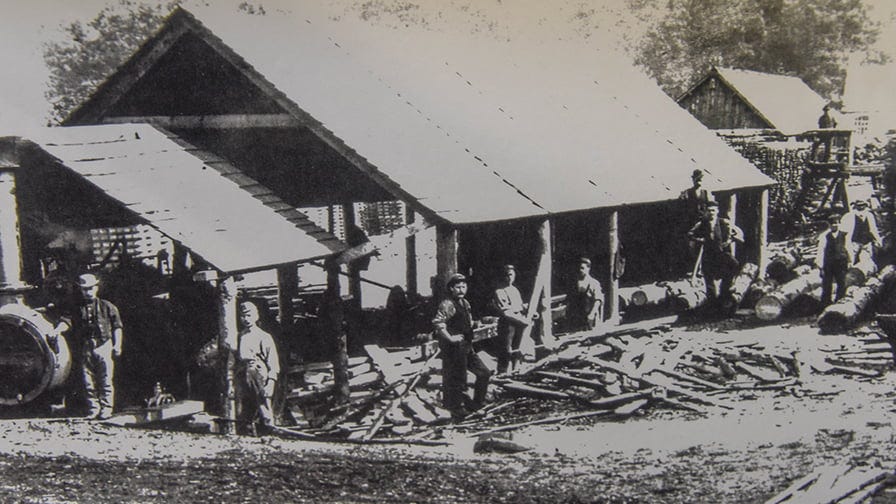 There is evidence of a sawmill at Carronbridge dating back to the 1850s.

Located just a short distance from the Galloway Forest – which produces 600,000 tonnes of timber a year – coupled with good transport links makes the site well positioned for what it does.

It wasn’t until 1995 that Brian decided to take over the operation, renting the 8-acre site from the Duke of Buccleuch.

Brian said: “I set it up as a sideline business and a proper base for my core work as a timber harvester. But over the years we got quite good at what we were doing and all of the sudden the timber harvesting became a sideline to the mill.”

As a wood cutter Brian had noticed shortage of places to send smaller logs. “It was just piling up on the side of the road and there was nowhere to get rid of it,” he explained. 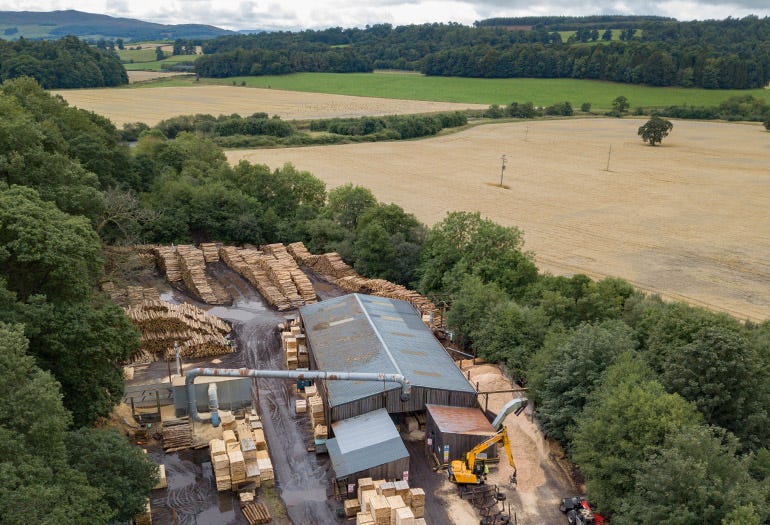 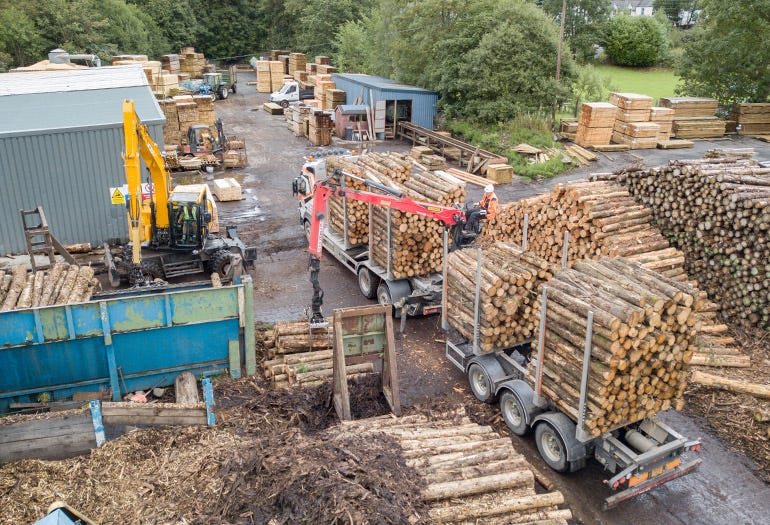 “I came up with the bright idea of putting a sawmill in to turn them into pallets and that got rid of the problem.” It took an initial investment of £40,000 and a team of six staff to help get the milling business off the ground. “It was just interesting to work with all the wood and I saw the potential to grow the business,” Brian added. 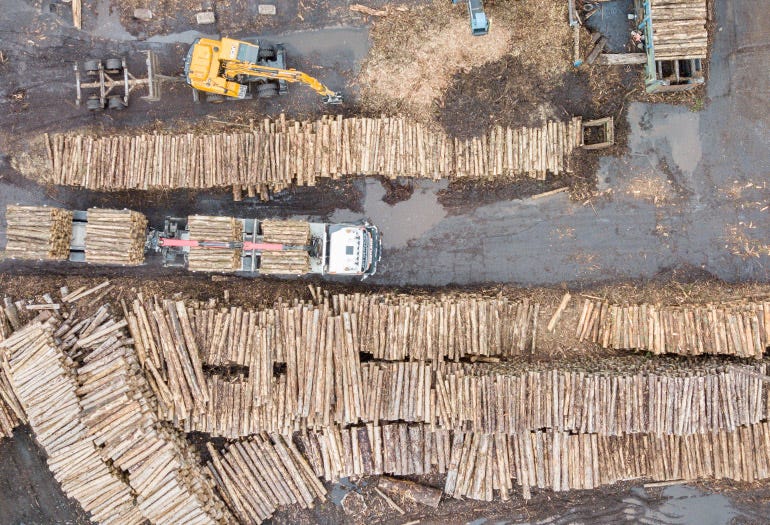 Slowly and steadily the mill – and its reputation – grew. It made the natural progression into fencing as its customer base developed with an emphasis on slats and feather-edge boards.

“It has taken us a long time but we have a built up an excellent customer base now,” he said. “We don’t have a sales manager so all our orders are repeat business and people who have seen what we do and like it. “We like to focus on quality and we feel we deliver that for our customers.

“A lot of the large mills are very good at what they do but their operations are quite rigid so they’re looking to do articulated lorries filled with one product. “We will regularly put seven or eight different sizes and products onto lorries because that’s what our customers want.”

Brian always has one eye on the future and another on the financials. He says the availability and cost of timber are big concerns.

UK timber prices have shot up due to an increase in demand for smaller logs from power stations and, with a weakening of the pound, many house builders are also looking to secure domestic supplies rather than import.

“At the moment it’s quite hard to buy logs – particularly smaller sizes because the power stations are taking them. One nearby is burning close to 700,000 tonnes per year of virgin wood,” Brian said. “Forest owners are doing very well at the moment – probably the best they’ve ever done, but in the past they’ve arguably not been getting the price they deserve. “We don’t know if we have reached the top of the market yet.”

That was one of the key reasons why Brian was attracted to a high production machine. Having the ability to handle large logs which are too big for many markets would allow him more freedom when sourcing timber.

First introductions to the WB2000

At the LIGNA forestry event in Germany in 2017 he came across Wood-Mizer’s WB2000.

He said: “At the time I didn’t know Wood-Mizer made a wide band so it really caught my eye. “They brought it over to a demonstration day in Cumbria so I took Bill to go and look at it. “We make an offer on it there and then.”

He became the first owner of a WB2000 in Europe and, at the time of writing, remains the only owner of the machine in the UK.

“We picked the machine up from Cumbria and hired a crane to work in tandem with a forklift to place the mill into position,” Keith said. “It was a very low shed, so that was challenging, then Brian and his team had some work to do getting the wiring set up. We came back a few weeks later to complete the installation and train the operator.”

One year on, Brian is pleased with what he has seen but, as ever, is looking at what he can do next.

“The saw is very good but we could run it a lot faster - we’re not using it to its full potential just yet. With one mill we are doing up to 60 cubic tonnes a day and with the wide band we’re doing a further 15 cubic tonnes from bigger logs for smaller orders such as rails, fencing, gate posts and sleepers. There’s not much that the WB2000 can’t do to be honest because it handles such a big log and that’s the main advantage it has given us; the ability to cut 16ft logs. In the past we could only cut up to 12ft so we have the ability to buy bigger logs so we’re not competing so much with the power stations.”

Racing forward Growth continues to be on the cards for the Carronbridge mill – and not always through conventional channels.The Wylie’s son, Ross, has established himself in the motor racing industry with Porsche, Ferrari, Aston Martin, Volkswagen, McLaren and Mini, making some useful contacts on the way.

“A lot of people in the milling and forestry industry do go-karting and motorsport at the weekend so Ross has brought a lot of contacts to us who need various timber products made,” Brian said. “There are very few people who can make it as a driver in that industry so he has done well. “One day we would like to come back and run the business, but who knows when that will be – he’s having too much fun doing what he’s doing at the moment.”